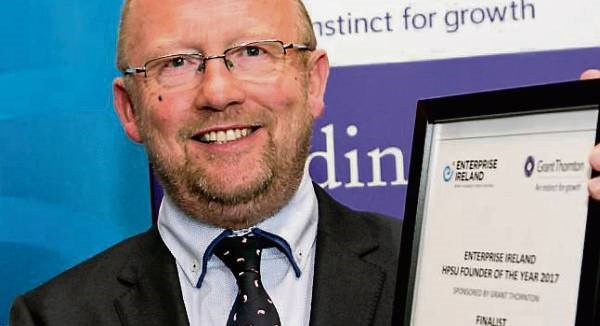 With innovative technology that uses solar power and LED lighting to illuminate bus shelters and advertising displays, Dublin technology start-up Solar AdTek is aiming to make a breakthrough in global markets this year.

The company, established in 2014, specialises in providing energy-efficient lighting for advertising. It has already installed solar lighting systems for bus shelters in 20 locations, including seven in Ireland. as well as some in Sweden and France.

“We will shortly have solar advertising units in the UK, Italy, Dubai and Belgium and expect to have installed a minimum of 200 by the end of the year,” said Solar AdTek co-founder and chief executive Eoin O’Broin.

The company also provides LED lighting systems which have been specifically designed for grid-connected advertising displays and already has customers for these in eight countries.

“We are now talking to companies in 12 countries and expect growth of up to 500% in this side of the business this year,” said Mr O’Broin.

Solar AdTek is starting the new year with contracts to supply 1,300 sets of LED lights for use in advertising signs in UK motorway service stations and 600 for use in rail and bus stations in Ireland. The company has also tendered for a significant UK project and will be making an announcement about a large Irish project next month….